The Hospice’s Family Support Team helped to give Jake a future and Eddie his life back.

Thank you to Carol Plumb for sharing how the Hospice's Family Support Team helped her family through some dark days.

When Eddie was diagnosed with terminal cancer it was like a hammer blow to the family. He was only 52. He was given six months, but he wouldn't have it. He was determined to be there for our youngest son Jake, to "see him through school".

Eddie used to have dark days but when we were introduced to the Hospice a bit of light came back into Eddie's life. At the drop-in, he knew everyone's names and would sit, talk and listen. He had a purpose; at the Hospice he could be the old Ed, not Ed with cancer. 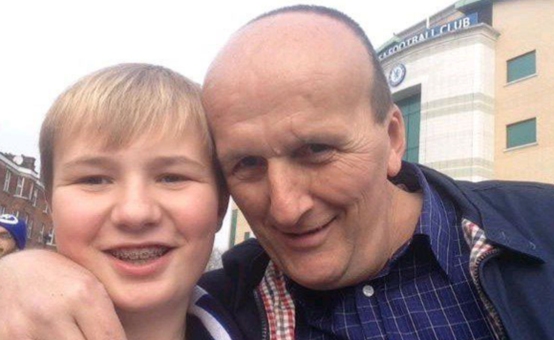 Mostly, I would let Eddie go on his own. He used to call it his "special club". It gave him an outlet and me the chance to have a breather and not worry about him. At the same time, I could pop in for a coffee, have a chat and bend an ear. Lyndsey, the Social Worker, was a great support on those days, she enabled us to vent our feelings and she would just listen.

When Eddie was diagnosed he told our oldest kids Wayne and Kirsty, but he refused to tell Jake, even though Jake knew something was wrong. Unfortunately on Jake's first school trip away one of the kids told him. He was in France and alone with that news. He was so angry with us, he wanted someone to blame, and he blamed us for what was going on with his dad's illness.

Lyndsey offered to talk with Jake. He wanted someone to tell him the truth and she did. Jake knew his conversations with Lyndsey were confidential and for once nothing was hidden. She told him that his dad wouldn't get better, and she prepared him.

At the end of Ed's life, Jake knew what was coming. He even said: "Mum we're losing him, Lyndsey said this would happen". Wayne, Kirsty and I were all in denial, hoping that Ed would rally but Lyndsey had given Jake the strength to face it.

Without Lyndsey, I think this would have destroyed him. He was so angry, he wanted to fight the world and he felt guilty for having a life. But now he's got his head screwed on right ad he's planning to go to college.

I will be forever grateful to the Hospice for their help, support, advice and equipment, but especially because they gave Jake a future and they gave Eddie his life back.